The Oyu Tolgoi series of porphyry copper-gold deposits, which includes the Entrée/Oyu Tolgoi JV deposits, occur along a north-northeast corridor with Hugo North Extension at the north end and the Heruga deposit at the south end. Mineralization is related to Devonian quartz monzodiorite intrusions and associated quartz stockwork. The deposits have varied characteristics in regard to host rock, intrusive bodies, sulphide mineralogy, grade, and alteration. 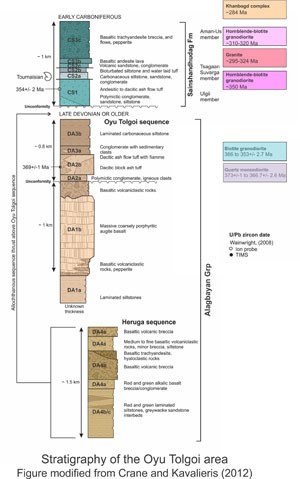 The pre-Carboniferous stratigraphy of the Oyu Tolgoi series of deposits consists of massive augite basalt, conglomerate, dacitic tuffs, and siltstones, which are overthrust by the ‘Heruga sequence’, comprising basaltic flows, volcaniclastic rocks, and siltstones. The Carboniferous Sainshandhudag Formation unconformably overlies the older rocks. Major Carboniferous or younger faults disrupt the mineralized corridor and bound the western side of most deposits.

Four major lithological divisions are present within the Alagbayan Group, and each of these divisions consists of two or more mappable subunits. The two lower units are commonly strongly altered and form important mineralization hosts, while the two upper units lack significant alteration and mineralization. Unit DA4 is separated from the underlying Alagbayan Group units by a contact-parallel fault, known as the Contact Fault.

The Sainshandhudag Formation is divided into three major units at Oyu Tolgoi: a lowermost tuffaceous sequence, an intermediate clastic package, and an uppermost volcanic/volcaniclastic sequence. The unit post-dates porphyry mineralization and is separated from the underlying Devonian rocks by a regional unconformity.

Intrusive rocks are widely distributed through the area and range from large batholithic intrusions to narrow discontinuous dykes and sills. At least seven classes of intrusive rocks can be defined on the basis of compositional and textural characteristics. Copper-gold porphyry mineralization is related to the oldest recognised intrusive suite, consisting of large Devonian quartz monzodiorite intrusions that occur in all of the deposit areas.

The Oyu Tolgoi project area is underlain by complex networks of poorly exposed faults, folds, and shear zones. These structures influence the distribution of mineralization by both controlling the original position and form of mineralized bodies, and modifying them during post-mineral deformation events.

Variations in bedding attitude recorded in both oriented drill core and surface outcrops define two orientations of folds: a dominant set of north-east trending folds, and a less-developed set of north-west trending folds. These folds are well defined in bedded strata of both the Sainshandhudag Formation and Alagbayan Group. They may be present in stratified rocks throughout the property, but outcrop and drillhole data are insufficient to define them in many areas. There is no evidence of a penetrative fabric (e.g., cleavage) associated with folding.

Together, the two orientations of folds form a dome-and-basin interference pattern, but it is not possible to determine their relative ages. Both of the dominant fold orientations occur in Lower Carboniferous strata, indicating that both folding events post-date mineralization.

Sedimentary facing direction indicators, including grading, scour and fill structures, load casts, and cross-bedding, are sporadically observed in drill core from along the east flank of the Hugo Dummett deposit. These suggest that parts of the Alagbayan Group are overturned. However, no large isoclinal folds have been mapped from drill core.

Entrée has a 20% interest in mineralization hosted on the Hugo North Extension deposit.

Host rocks at Hugo North Extension are an easterly dipping sequence of volcanic and volcaniclastic strata correlated with the lower part of the Devonian Alagbayan Group and quartz monzodiorite intrusive rocks that intrude the volcanic sequence. The Devonian stratified host rock sequence dips moderately (65° to 75°) to the east or south-east, except for a structurally induced strike flexure in the southern part of the deposit, within which dips are southward.

The stratigraphically lowest rocks in the host sequence are basalt flows and minor volcaniclastic strata, overlain by a basaltic tuff and breccia sequence. The basaltic tuff sequence has been affected by advanced argillic alteration to give it the appearance of a dacitic tuff. The host sequence basaltic volcanics are overlain by dacitic block and ash tuff and dacitic ash flow tuff. Weakly altered to unaltered sedimentary and volcanic rocks of the upper Alagbayan Group and Sainshandhudag Formation structurally overlie the mineralized sequence along the eastern flank of the deposit.

Intrusive rocks are dominated by quartz monzodiorite bodies that underlie the entire deposit area and host a significant portion of the copper and gold mineralization. Intrusive contacts are typically irregular but overall show a preferred easterly dip, sub-parallel to stratification in the overlying rocks. The quartz monzodiorites are contemporaneous with alteration and mineralization. The quartz monzodiorite is considered to be the progenitor porphyry, and two zones are distinguished on the basis of alteration characteristics and position within the deposit.

A late- to post-mineralization biotite granodiorite intrusion forms a northerly striking dyke complex cutting across the western edge and deeper levels of the deposit. At higher levels, the biotite granodiorite flares out considerably to form a voluminous body. Although this intrusion locally contains elevated copper grades adjacent to intrusive contacts or within xenolith-rich zones, it is essentially barren.

The Hugo North deposit lies within easterly dipping homoclinal strata contained in a north–northeasterly elongate fault-bounded block. The northern end of this block is cut by several east-west- and northeast-striking faults near the northern boundary of the Oyu Tolgoi mining licence.

Several iterations of the structural framework have been modelled between 2007 and 2014. Deformation of Hugo North and Hugo North Extension is dominated by brittle faulting. Major faults cutting the deposit can be grouped on the basis of orientation into the following sets:

Fold styles and orientations in the Hugo North deposit are similar to those at Hugo South, with most folding restricted to the upper part of the Alagbayan Group and overlying Sainshandhudag Formation.

The highest-grade copper mineralization in Hugo North Extension is related to a zone of intensely stockworked to sheeted quartz veins known as the QV90 zone, so named because >90% of the rock has >15% quartz veining. The high-grade zone is centred on thin, east-dipping quartz monzodiorite intrusions or within the apex of the large quartz monzodiorite body, and extends into the adjacent basalt. In addition, moderate to high grade copper and gold values occur within quartz monzodiorite below and to the west of the intense vein zone, in the Hugo North gold zone. This zone is distinct and has a high gold (ppm) to copper (%) ratio of 0.5:1.

Bornite is dominant in the highest-grade parts of the deposit (3% to 5% copper) and is zoned outward to chalcopyrite (2% copper). At grades of <1% copper, pyrite–chalcopyrite dominates. Within the upper levels where advanced argillically altered basaltic tuff is reported, the assemblage comprises pyrite–chalcopyrite ± enargite, tennantite, bornite, chalcocite, and more rarely covellite.

The high-grade bornite zone consists of relatively coarse bornite permeating quartz and disseminations in wall rocks, usually intergrown with subordinate chalcopyrite. Pyrite is rare to absent except locally where the host rocks are advanced argillically altered. Although chalcocite is commonly found with bornite at Hugo South, it is less common at Hugo North. High-grade bornite is associated with minor amounts of tennantite, sphalerite, hessite, clausthalite, and gold that occur as inclusions or at grain boundaries.

Elevated gold grades in the Hugo North deposit occur within the up-dip (western) portion of the intensely veined, high-grade core and within a steeply dipping lower zone cutting through the western part of the quartz monzodiorite. Quartz monzodiorite in the lower zone exhibits a characteristic pink to buff colour, with a moderate intensity of quartz veining (5% to 25% by volume), and is characterised by finely disseminated bornite and chalcopyrite. Sulphides are disseminated throughout the rock in the matrix as well as in quartz veins. The fine-grained bornite has a black “sooty” appearance. Red colouration of the rock type is attributed to fine hematite dusting, primarily associated with albite.

Hugo North Extension is characterised by copper-gold porphyry and related styles of alteration similar to those of Hugo North and Hugo South. These include biotite-K-feldspar (K-silicate), magnetite, chlorite-muscovite-illite, albite, chlorite-illite-hematite-kaolinite (intermediate argillic), quartz-alunite-pyrophyllite-kaolinite-diaspore-zunyite-topaz-dickite (advanced argillic), and sericite-muscovite zones. The distribution of alteration zones is similar to that in the Hugo South deposit except that the advanced and intermediate argillic zones are more restricted and lie mainly along the outer and upper margins of the intrusive system.

Chlorite-illite marks the outer boundary of the advanced argillic zone, mainly in the coarse, upper part of the basaltic tuff/breccia.

Topaz is widespread as late alteration controlled by structures cutting both the advanced and intermediate argillic zone. In certain areas topaz appears to replace parts of the quartz–alunite zone. In addition, topaz may also occur disseminated with quartz–pyrophyllite–kaolinite.

Hematite–siderite–illite–pyrophyllite–kaolinite–dickite (intermediate argillic) is an inward zonation from the advanced argillic zone. It is commonly hosted by augite basalt but may also occur in basaltic ash-flow tuff. Hematite usually comprises fine specularite and may be derived from early magnetite or Fe rich minerals such as biotite or chlorite.

Hematite–chlorite–illite–(biotite–magnetite) (chlorite) is transitional to the intermediate argillic zone and is commonly hosted by augite basalt. It is characterised by a green colour and relict hydrothermal magnetite, either disseminated or in veins.

Muscovite–illite (sericite) generally occurs in the quartz-monzodiorite intrusions and is a feature of the strongly mineralized zone. Alteration decreases with depth in the quartz?monzodiorite.

The Heruga deposit contains copper–gold–molybdenum porphyry-style mineralization and is zoned with a molybdenum-rich carapace at higher elevations overlying gold-rich mineralization at depth. The top of the mineralization starts 500 metres to 600 metres below the present ground surface. On the Javhlant mining licence, the deposit has been drilled over approximately 2 kilometres, is elongated in a north–northeast direction, and plunges to the north onto the Oyu Tolgoi mining licence.

Entrée has a 20% interest in mineralization hosted on the Heruga deposit.

Quartz monzodiorite intrudes the Devonian augite basalts as elsewhere in the district, and again are considered to be the progenitors of mineralization and alteration. Within Heruga itself, quartz monzodiorite intrusions are small compared to the stocks present in the Hugo Dummett and Oyut areas. Non-mineralized dykes, which make up about 15% of the volume of the deposit, cut all other rock types.

The deposit is transected by a series of north–northeast-trending vertical fault structures that step down 200 metres to 300 metres at a time to the west and have divided the deposit into at least two structural blocks.

Mineralized veins have a much lower density at Heruga than in the more northerly Hugo Dummett and Oyut deposits. High-grade copper and gold intersections show a strong spatial association with contacts of the mineralized quartz-monzodiorite porphyry intrusion in the southern part of the deposit, occurring both within the outer portion of the intrusion and in adjacent enclosing basaltic country rock.

At deeper levels, mineralization consists of chalcopyrite and pyrite in veins and disseminated within biotite–chlorite–albite–actinolite-altered basalt or sericite–albite-altered quartz-monzodiorite. The higher levels of the orebody are overprinted by strong quartz–sericite–tourmaline–pyrite alteration where mineralization consists of disseminated and vein-controlled pyrite, chalcopyrite, and molybdenite.

There is no oxide zone at Heruga. No high-sulphidation style mineralization has been identified to date.

Sign up for the latest news and updates
Designed & Powered by BLENDER
LegalPrivacy Policy© 2020 Entrée Resources Ltd. All Rights Reserved