The Technical Report can be found here

Entrée’s technical report has been filed under the Company’s SEDAR profile at www.sedar.com and updates Entrée’s 2016 technical report on the Entrée/Oyu Tolgoi JV Project filed in March 2016. The Technical Report discusses two alternative development scenarios, an updated reserve case ("2018 Reserve Case") and a Life-of-Mine ("LOM") Preliminary Economic Assessment ("2018 PEA").  The 2018 Reserve Case is based only on mineral reserves attributable to the Entrée/Oyu Tolgoi JV from Lift 1 of the Hugo North Extension underground block cave. Lift 1 of Hugo North (including Hugo North Extension) is currently in development by project operator Rio Tinto, with first development production from Hugo North Extension expected in 2021. When completed, Oyu Tolgoi will become the world’s third largest copper mine.

Life-of-mine highlights of the production and financial results from the 2018 Reserve Case and the 2018 PEA are summarized in the table:

Both the 2018 Reserve Case and the 2018 PEA are based on information reported within the 2016 Oyu Tolgoi Feasibility Study ("OTFS16"), completed by OTLLC on the Oyu Tolgoi project. OTFS16 discusses the mine plan for Lift 1 of the Hugo North (including Hugo North Extension) underground block cave on both the Oyu Tolgoi mining licence and the Entrée/Oyu Tolgoi JV Property. Rio Tinto is managing the construction and eventual operation of Lift 1 as well as any future development of deposits included in the 2018 PEA.

Figure 1 below shows a north-south oriented, west looking cross section through the 12.4 kilometre long trend of porphyry deposits that comprise the Oyu Tolgoi project.  The Entrée/Oyu Tolgoi JV Property is to the right (north) and left (south) of the central portion, the Oyu Tolgoi mining licence, held 100% by OTLLC.  The deposits that are included in the mine plans for the two alternative cases, the 2018 Reserve Case and the 2018 PEA, are shown on Figure 1.

Below are some of the key financial assumptions and outputs from the two alternative cases, the 2018 Reserve Case and the 2018 PEA.  All figures shown for both cases are reported on a 100% Entrée/Oyu Tolgoi JV basis, unless otherwise noted, where it is for Entrée’s 20% attributable interest.  Both cases assume long term metal prices of US$3.00/lb copper, US$1,300.00/oz gold, and US$19.00/oz silver. 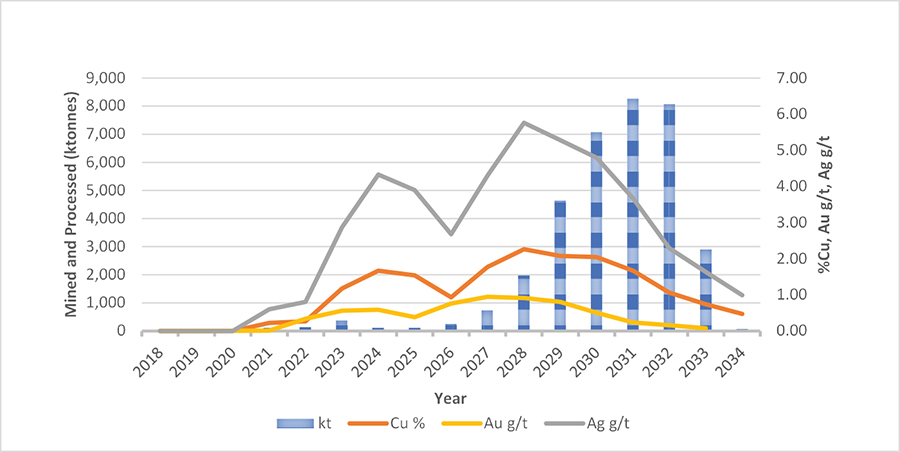 Note, the 2018 PEA and the 2018 Reserve Case are not mutually exclusive; if the 2018 Reserve Case is developed and brought into production, the mineralization from Hugo North Extension Lift 2 and Heruga is not sterilized or reduced in tonnage or grades. Heruga could be a completely standalone underground operation, independent of other Oyu Tolgoi project underground development, and provides considerable flexibility for mine planning and development. Although molybdenum is present in the Heruga deposit, the 2018 PEA does not include the construction of a molybdenum circuit for its recovery, but it could be added in the future if economic conditions for molybdenum improve. As noted in the Turquoise Hill Resources Ltd. press release dated October 21, 2016, there are also potential opportunities for increasing the underground mining rate (and mill throughput), which would require further development and sustaining capital and different operating costs, however it would likely result in Lift 2 and Heruga mineralization being mined earlier in the overall Oyu Tolgoi mine plan and potentially improved economics for Entrée.

The cash flows in the 2018 Reserve Case and 2018 PEA are based on data provided by OTLLC, including mining schedules and annual capital and operating cost estimates, as well as Entrée’s interpretation of the commercial terms applicable to the Entrée/Oyu Tolgoi JV, and certain assumptions regarding taxes and royalties. The cash flows have not been reviewed or endorsed by OTLLC. There can be no assurance that OTLLC or its shareholders will not interpret certain terms or conditions, or attempt to renegotiate some or all of the material terms governing the joint venture relationship, in a manner which could have an adverse effect on Entrée’s future cash flow and financial condition.

OT is a very large project that includes four separate deposits. The long-term development of OT would involve the development of the resources on all deposits. Alternative production cases have been developed to provide early-stage analysis of the development flexibility that exists with respect to later phases of the OT project (Heruga, Hugo South, and Lift 2 of Hugo North including Hugo North Extension).

The mine designs noted above that are in the alternative production cases and on the Entrée/Oyu Tolgoi JV Property are:

Under NI 43-101 guidelines, Inferred mineral resources are considered too speculative geologically to have the economic considerations applied to them that would allow them to be categorised as mineral reserves. There is no certainty that the alternative production cases will be realized.

The mine designs developed by OTLLC and considered in the alternative production cases are shown schematically in the figure below. 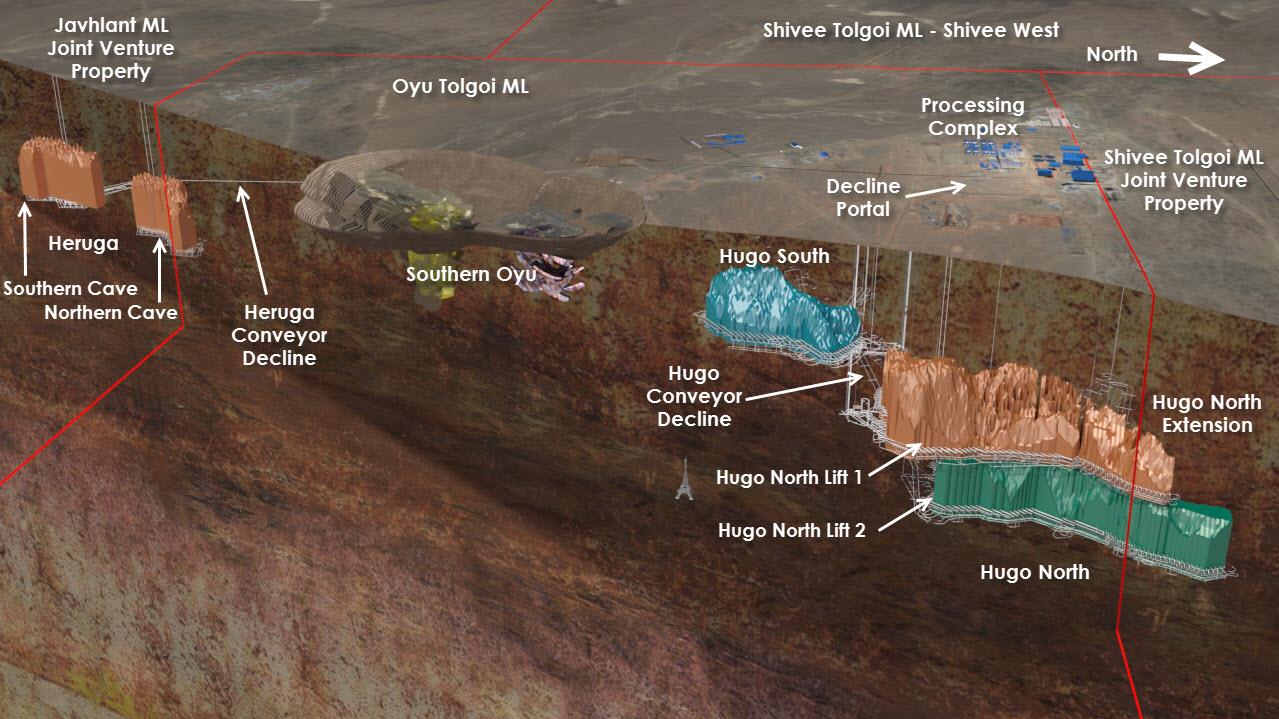 Development of these deposits will require separate development decisions in the future based on the prevailing conditions and the development experience obtained from developing and operating the initial phases of OT.

The figure below shows an example of the decision tree for the possible development options at OT including the Entrée/Oyu Tolgoi JV Property. This has been updated to include options that take advantage of productivity improvements in plant throughput that have begun to be recognized in the process plant. The decision tree shows options assuming that continuous improvements in plant productivity are achieved over the next five years. Then there would be key decision points for plant expansion and the possible development of new mines at Hugo North (including Hugo North Extension) Lift 2, Hugo South, and eventually Heruga. This provides an opportunity as OTLLC will have the benefit of incorporating actual performance of the operating mine into the study before the next investment decisions are required. OTLLC plans to continue to evaluate alternative production cases in order to define the relative ranking and timing requirements for overall development options.

LOM 260 is an extension of LOM 140 and assumes that the plant capacity is doubled after approximately 20 years to an average throughput rate of 260 ktpd or 95 Mtpa.

LOM 350 assumes that there are progressive plant expansions to an ultimate rate of 350 ktpd or 128 Mtpa. With each successive expansion case there is a reduction of the mine life that would necessitate the success of further exploration to continue production. In LOM 350 this would be required to bring the exploration potential to production in approximately 30 years.

The work on the alternative production cases is not yet at Feasibility Study stage, in particular the definition of the expansion sizes and costing of the cases. OreWin Pty Ltd recommends that the options be studied further and that the timing of the new mines be defined in more detail.

Sign up for the latest news and updates
Designed & Powered by BLENDER
LegalPrivacy Policy© 2020 Entrée Resources Ltd. All Rights Reserved